skip to main | skip to sidebar

Not a good week for missionary aviation...

...as you can see in the pictures below. The airplane in the pictures is 9J-CMT, which used to serve with AIM AIR under the registration 5Y-CMT. It is a Cessna turbocharged 210, previously owned by the Baptist Mission (Southern Baptists/IMB), which flew in conjunction with AIM AIR, and is now owned by Flying Mission. It has been flying in and around Zambia/Botswana/etc and went down on January 26 due to engine complications. As you can see, it was in the middle of NOWHERE, but everyone survived due to some good flying by the pilot. Once again, praise the Lord that there were no injuries, just another busted up missionary airplane. 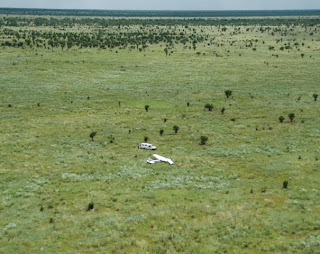 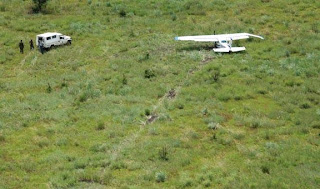 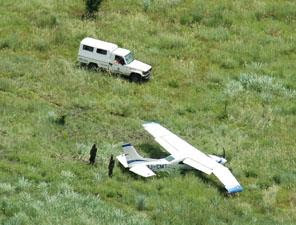 N341EA is a Cessna 185 on amphibious floats that AIM AIR has the privilege of operating down on Lake Victoria. Last week, it crashed on landing in the lake and flipped upside down in the water. An AIM AIR recovery team was able to fly down to Tanzania and worked for about four days. They were able to get the airplane upright, but it is still under water. The team is heading back down to TZ today where they will meet a large crane on a barge which will lift the plane out of the water and take it to land. They will then partially dismantle it and bring it to Nairobi.

Please pray for the team as they will be working hard over the weekend to get the airplane out of the water and prepped for travel to Nairobi.

Pray for the pilot of the airplane. He was the only one in the plane at the time of the incident and was able to escape without injury. Pray for him and his family during this time.

Pray for the team of AIM AIR as we assess the damage and seek the best way to proceed. 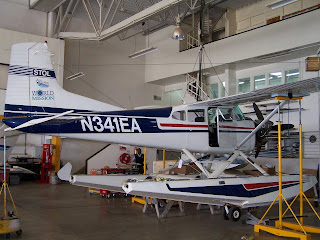 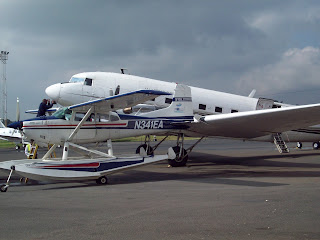 For a small blurb on the AIM AIR website, go here.
AIM AIR - "Serving those who serve"
Posted by The Roberts Eight at 7:18 AM No comments:

Well, the new Samaritan's Purse airplane arrived last week while I was on vacation. It is a King Air B200C, N468SP. It is a really nice looking plane and it will serve well here in Kenya. 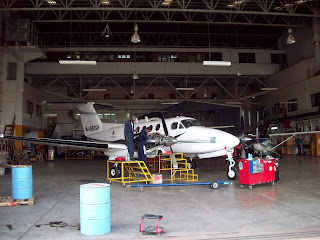 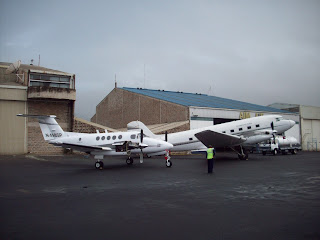 Posted by The Roberts Eight at 9:37 AM No comments:

So finally we've been able to actually install the new skin in the belly of the tail section of N4790U. It's been sitting inside the plane for about 2 months. I had removed the old piece and then match drilled and cut the new piece. So I fitted it in, and Caleb and I shot all the rivets. It was a long and tedious job, because I was way back into the tail section of the airplane on my belly...most uncomfortable. I think Caleb had the better job...he got to lie on his back on a cushioned platform with a pillow under his head! I guess he did have to hold the rivet gun over his head, so that was a little tiring...

Anyway, here's some pictures from the past few days: 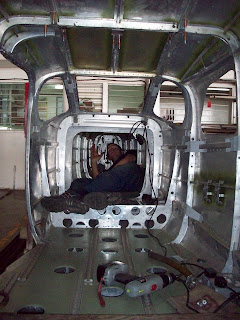 Where I was for about 2 days. 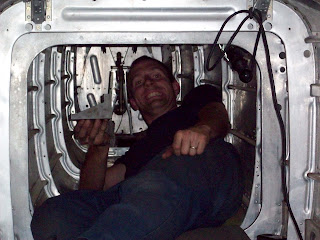 Behold, the magic bucking bar! Courtesy of a sheetmetal project at A&P school at MAI. 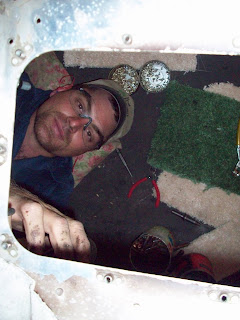 Who's that scary guy?! Peeping out the elevator bellcrank inspection panel at Caleb. 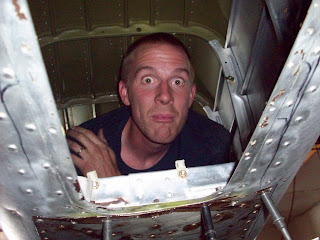 Aagghh!! That's even scarier! What Caleb was blessed to be seeing from his position. 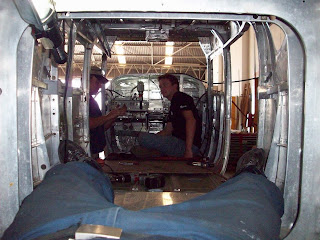 What I saw looking toward the front of the plane. That's the two new guys, Caleb on left and Nate Killoren on right. Makes sense, right, since this will be a SIM plane... 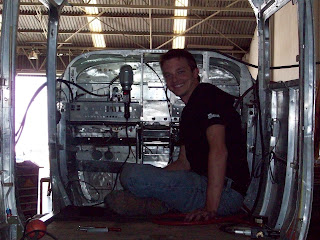 Nate Killoren, working his hands to the bone on the components behind the instrument panel. I wish I had a picture of his T-shirt...it says, "Coffee snob."
Posted by The Roberts Eight at 6:51 AM No comments:

So anyway, here's the little video I put together of our flight of 7DG. I hope that you enjoy watching it.

Thanks again to all those who took part in this project. I know that it will serve the mission community and the national community well for years to come.

AIM AIR - "Serving those who serve"
Posted by The Roberts Eight at 7:24 PM No comments:

Posted by The Roberts Eight at 9:37 AM No comments:

We changed the left engine on the DC-3 this week. It was probably the hardest PT6 change that I have ever done. The Twin Otter is easier because the engine sits horizontal to the ground, whereas the DC-3, it has to be inserted at an angle. It also has four engine mounts as opposed to three mounts on the Twin Otters, King Air 90s, Caravans, etc. That's one of the differences in a large PT6 engine.

Anyway, it went pretty well. We did a few adjustments and rigging Friday afternoon and are planning to do a test flight on Monday. It will be the first time I have ever flown in a DC-3. Dad, I'm sure you're jealous. 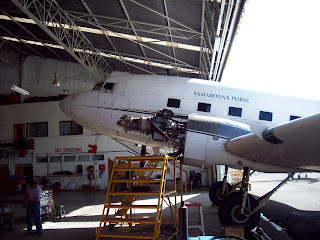 Getting it ready to take off of the airplane. 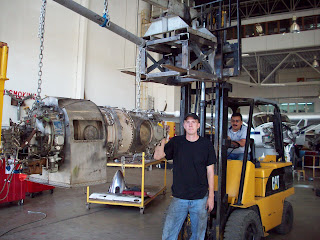 Just taken off...me and Jose, the other SP mechanic.

Now that we have the engine change pretty much taken care of on the DC-3, I should be back to working on N4790U next week. Stay tuned for pictures.

Posted by The Roberts Eight at 6:50 AM No comments:

For all you aviation enthusiasts... 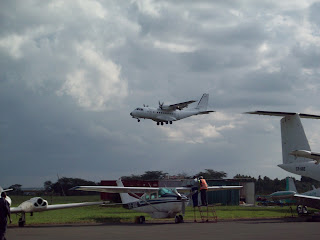 This is a CASA owned by Prescott. It has been living at the end of our ramp for a few months. 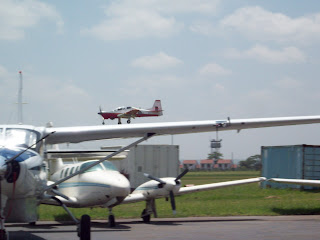 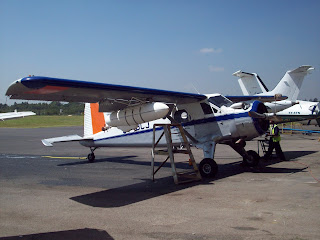 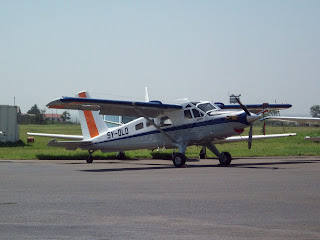 New and improved...a turbine DHC-2 Turbo Beaver. Both the turbine and the radial Beavers live next door to us in the Desert Locust hangar.
Posted by The Roberts Eight at 3:24 PM No comments:

The Roberts Eight
We are Nathan, Candace, Dinah, John, Ruth, Ezra, Titus, and Abel Roberts. Come along on our journey as we see where the Lord takes us next!

Some of my favorite aviation websites